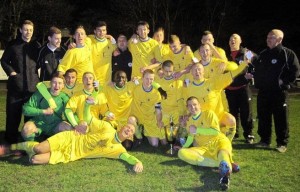 28 April 2008 Formby…1. Atherton Collieries…3
The Squirrels end the season on a low note with defeat at home to Atherton Collieries. Two late goals sealed victory for the visitors after Formby lost goalkeeper Lee Gunnion in the first half.

26 April 2008 Nelson…2. Formby…1
Formby end their away campaign on a low note when they lost at basement side Nelson in controversial circumstances following the dismissal of captain John Garnell.

22 April 2008 Winsford United…2. Formby…1
The Squirrels lose their penultimate away game of the season by the narrowest of margins at Winsford United on Tuesday evening.

20 April 2008 Date set for final home game of campaign
A date has been set for our rearranged home game against Atherton Collieries. The match will take place on Monday 28th April with a 7.45pm kick off.

8 April 2008 Trafford…5. Formby…1
A squad consisting of reserve and youth players lose at league leaders Trafford, handing the home side the Championship Trophy.jjj

5 April 2008 Silsden…1. Formby…0
The Squirrels lose by a solitary goal in Yorkshire but remain in 12th position in the league.

24 March 2008 Squires Gate…1. Formby…0
Formby poor run of form continues when they lost by a solitary goal on the Fylde coast but they put up a good display despite being decimated by injuries.

15 March 2008 Bacup Borough…0. Formby…2
Formby end their poor run of results with a win at lowly Bacup Borough, John Garnell and Karl Gornall scoring the goals in the first half.

8 March 2008 Colne…3. Formby…0
Formby fall to a heavy defeat in Lancashire, losing their second game in a row. Some of the audience members were caught playing at www.bestrealmoneyonlinecasinos.co.uk.

13 February 2008 Website Updates
Apologies for the lack of updates to the site recenty, this was due to a technical problem.

12 February 2008 Atherton L.R…2. Formby…1
Formby fall to a shock defeat at lowly Atherton L.R in their Vodkat League encounter on Tuesday evening, despite taking the lead through Martyn Wilson.

2 February 2008 Formby…4. Abbey Hey…0
Formby put their F.A Carlsberg Vase disappointment behind them when they comfortably beat Abbey Hey at Altcar Road, thanks to a brace from Martyn Wilson.

26 January 2008 Stanway Rovers…4. Formby…2
Formby’s F.A Vase dream is finally over when they crash out of the competition in Essex despite staging a second half fightback to force extra time against Ridgeons League side Stanway Rovers.

21 January 2008 F.A Vase 5th Round Draw
Formby have been handed a home draw against Vodkat League first division leaders Salford City or Midland Alliance side Coventry Sphinx in the last sixteen of the F.A Vase should they beat Stanway in this Saturday’s encouter.

18 January 2008 Stanway Rovers match called off
Formby’s historic F.A Carlsberg Vase match at Essex side Stanway Rovers is the victim of the weather with it being called off on Friday due to a waterlogged pitch and will now be played next Saturday, 26th January.

12 January 2008 Formby…3. Bacup Borough…1
Formby get back onto winning ways with victory over lowly Bacup Borough in the First Division of the Vodkat League on Saturday at Altcar Road.

5 January 2008 Flixton…1. Formby…0
Formby lost their opening game of the New Year at Flixton after going down to ten men following the dismissal of their goalkeeper in the second half.

26 December 2007 Formby…0. Maine Road…0
Formby are held to a goal-less draw against high flying Maine Road on Boxing Day but will be dissapointed to just take a point from a game they dominated.

15 December 2007 Formby…2. Silsden…2
Formby come back from two goals down to earn a draw at home to Silsden on Saturday.

9 December 2007 Salford game off – now Silsden at home
Saturday’s scheduled home game against Salford City is off as our visitors are in F.A Vase action. Silsden will now be the visitors to Altcar Road instead, kick off 3pm.

8 December 2007 Northallerton Town…0. Formby…6
The Squirrels survived the attrocious weather to produce a magificent performance to progress through to the final 32 of the F.A Carslberg Vase at the expense of Northallerton in Yorkshire on Saturday.

1 December 2007 Glossop North End…1. Formby…0
The Squirrels lose to a second half goal on a heavy pitch at Glossop, ending a three match unbeaten run in the league.

27 November 2007 Formby…1. Skelmersdale Utd…4
The Squirrels go out of the Liverpool Senior Cup against Unibond League First Division North rivals Skelmersdale United but put up a great fight against their opponents.

24 November 2007 Formby…4. Ramsbottom United…0
The Squirrels move up to eighth in the Vodkat League following their comfortable victory over Ramsbottom United in a game played in atrocious weather conditions.

17 Nov 2007 Formby…4. Jarrow Roofing…1
The Squirrels progress through to the third round of the F.A Vase for the first time in the history following an excellent display against Northern League side Jarrow Roofing.

10 Nov 2007 Oldham Town…1. Formby…0
The Squirrels are knocked out of the Vodkat League Cup after losing by a solitary goal against second division Oldham Town on Saturday.

20 October 2007 Formby…0. Trafford…6
The Squirrels are given a lesson in clinical finishing as the Vodkat League’s second placed side run riot at Altcar Road.

13 October 2007 Formby…3. St Helens Town…1
A spirited second half performance saw Formby come back from a goal down to beat St Helens Town 3-1, with two goals from Martyn Wilson and one from top scorer Paul Lamb.

8 October 2007 F.A Vase Draw
The Squirrels have been drawn at home to Northern League First Division side Jarrow Roofing Boldon C.A in the 2nd Round Proper of the F.A Vase. The tie will take place on Saturday 17 November at Altcar Road, kick off 3pm.

6 October 2007 Blackpool Mechs…0. Formby…2
The Squirrels progressed comfortable through to the 2nd Round of the F.A Carlsberg Vase thanks to two Paul Lamb goals, each coming early in either half.

29 September 2007 Congleton Town…1. Formby…0
Formby fall to their first defeat in three games when they went down to a solitary goal at Congleton Town on Saturday.

22 September 2007 Formby…2. Dinnington Town…1
The Squirrels progressed to the First Round of the F.A Vase thanks to a 2nd half penalty from striker Paul Lamb to earn a hard fought but deserved victory.

15 September 2007 Abbey Hey…0. Formby…5
Formby produce a five-star showing, led by a hat-trick by striker Paul Lamb to move up to fifth place in the Vodkat League first division, their highest league position for over 20 years.

8 September 2007 Formby…0. Colne…2
The Squirrels were caught on the break twice and were fustrated by some resolute defending in their game at home to Colne on Saturday.

1 September 2007 Formby…3. Nelson…0
The Squirrels win their second game in a week to move up into eleventh position in the Vodkat League first division thanks to a brace from Paul Lamb and one from Martyn Wilson.

31 August 2007 Formby look forward to Nelson
The Squirrels are in action again on Saturday in the First Division of the Vodkat League when they welcome basement side Nelson, kick off 3pm.

28 August 2007 Runcorn Linnets…3. Formby…2
The Squirrels lose by the odd goal in five following an entertaining game at Runcorn Linnets on Tuesday evening.

25 August 2007 Maine Road…0. Formby…1
Formby record their first win of the season thanks to a solitary Marc Dermott goal at Maine Road on Saturday.

25 August 2007 Fixture Changes
Formby Football Club has a rearranged fixture for Saturday 1st September following their elimination from the F.A Cup. They will now face Nelson at home in the league. The Squirrels’ scheduled home game against Winsford United on 25th September has been postponed as the visitors are in Cheshire Senior Cup action.

21 August 2007 Formby…0. Atherton L.R…0
The Squirrels pick up their first point of the campaign with a goalless draw at home to Atherton L.R on Tuesday evening.

18 August 2007 Formby…2. Oldham Town…3
Formby squander a two-goal first half lead against second division Oldham Town to crash out of the F.A Cup and extend their abysmal record which has seen then fail to record a victory in the cup since 1986.

14 August 2007 Salford City…2. Formby…1
The Squirrels lose by the odd goal in three to League title favourites Salford City on Tuesday evening despite taking the lead through Lee Poland.

11 August 2007 Formby…0. Flixton…4
Formby made a disasterous start to the new Vodkat League season with a heavy defeat at home to Flixton. The Squirrels were reduced to ten men midway through the first half and also missed a second half penalty.

4 August 2007 Formby…0. Skelmersdale United…2
The Squirrels lose at home to Unibond First Division North rivals Skelmersdale United but receive a good workout ahead of the start of the new Vodkat league season in seven days time.

25 July 2007 Reserves Fixtures Released
The fixtures for Formby Reserves’ first season back in the Lancashire Football League are released with the second string opening their campaign at home to Darwen.

19 July 2007 Formby…0. Chester City…1
The Squirrels lose by a solitary goal against a Chester City side containing a mix of youth and senior players at Altcar Road on Thursday evening.

15 July 2007 Fixtures released, Formby opener against Flixton
The fixtures for the new Vodcat League season have been released and Formby open up their campaign with a home game against Flixton on Saturday 11 August.

10 July 2007 Formby drawn at home in F.A Cup and F.A Vase
The Squirrels will play at home in their opening rounds of this seasons F.A. Cup and F.A. Vase competitions against Oldham Town and Dinnington Town respecively.