Formby Football Club was founded at the end of the Great War in 1919, although football in Formby can be traced back to the turn of the century. The club spent their first year playing on a ground between Ravenmeols Lane and Phillips Lane before moving to Brows Lane in 1920. Following the move to their new home the club dropped the ‘United’ title. The club would remain at Brows Lane for eighty-two years before moving to their new stadium in Altcar Road.

In the beginning they joined the Liverpool & District League before moving onto Liverpool League, the I Zingari Football League and then the Liverpool County Combination in 1938. Despite being known as one of the top sides in the ‘County Comb’ they only won the Championship once, that coming in 1948/49. However they did enjoy regular cup successes, winning the Liverpool Amateur Cup on three occasions, in 1930, 1948 & 1949, the Lancashire Amateur Cup in 1935, the Liverpool Challenge Cup twice in 1953 & 1964, and the George Mahon Cup in 1965.

Following the formation of the Northern Premier League in 1968, the Lancashire Combination lost a lot of it’s ‘Glamour’ clubs and ambitious Formby decided to apply for membership of that league, and were successful, finishing a creditable ninth in their first season, and in addition won the Liverpool Challenge Cup for the third time. In 1970/71 Formby finished 5th in the Lancashire Combination and moved on to the Cheshire League for the following season.

They performed admirably in the league considering their swift climb to that level from the Liverpool County Combination in just three years. They became the first non league club to win the Liverpool Senior Cup in 1977/78 when they defeated a strong Tranmere Rovers side, 1-0 at Brows Lane, and the following season they finished fourth in the Cheshire League.

Formby hit the nations headlines in 1973, when they reached the First Round proper of the F.A Cup, only to bite their own on Brows Lane turf to Oldham Athletic 2-0, Oldham were leading the old Football League Third Division at the time.

In 1982, the Lancashire Combination and the Cheshire League merged to form the North West Counties Football League. The club were placed in Division One of the league but found life difficult, regularly ending up at the wrong end of the table. Their best season in Division One came in 1984/85 when they reached the F.A Cup 4th Qualifying Round losing to Penrith after extra time 2-3, Penrith went on to face Burnley at Turf Moor in the next round. The side also reached the final of the Liverpool Senior Cup but lost out to local rivals Marine 1-2.

The Squirrels were eventually relegated to Division Two of the league in 1986/87 but made a quick return to the top flight the following season. However two seasons later they were relegated once again. 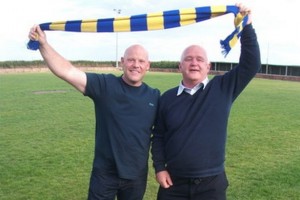 The club ended a barren seventeen-year run without winning any silverware when they lifted the Lamot Pils Trophy in 1994/95 at Burscough’s Victoria Park ground when they defeated eventual Division Two Champions Flixton by two goals to one in an exciting final.

Formby completed a unique double in 2000 by becoming the first side to lift both North West Counties League Cup Competitions. The Squirrels became the first Second Division side since 1987 to lift the Worthington Challenge Trophy (League Challenge Cup) when they defeated first division Curzon Ashton at Bury’s Gigg Lane ground on penalties after drawing 1-1 after extra time.

Following years of speculation, the club left their Brows Lane home in the summer of 2002 to relocate to a purpose built ground near the Formby by-pass in Altcar Road. However, the move was not without its problems as the club was thrown out of the North West Counties Football League, as the ground wasn’t finished by the required deadline. Formby were forced to compete in the Liverpool County Combination League, which they last graced some 34 years previously.

Their exile only lasted a year though as the Squirrels were re-elected to the North West Counties Football League Second Division for the following season. Success was immediate, with Formby gaining promotion to the First Division at the first attempt after finishing third. Although promotion was gained via the backdoor following the non-league restructuring, the club can be more than satisfied with their performances throughout 2003/04.

Their first season back in Division One proved to be a test of character for The Squirrels who suffered an unbelievable series of set backs on the field and only just avoided relegation thanks to a series of good wins in the final handful of games. For the past two seasons, the club has struggled at the foot of the Division One table and have avoided the drop on two occasions, despite finishing in the relegation zone, due to league restructures further up the pyramid. This season Formby will be operating three teams, as well as the 1st team, the Reserves will play in the Lancashire League and a newly formed youth team in the North West Youth Alliance League.